How Access to HE helped me to study a law degree

Alexander Bailey, who studied the land-based Access to HE Diploma at University Centre Reaseheath in 2015/16, shares his experience and explains how it helped him progress onto a degree to pursue a career in law. 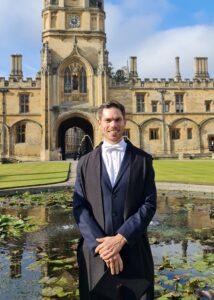 A few years ago, I wanted to embark on a new career path which required an undergraduate degree (as well as a postgraduate qualification), however, as I had only completed a Carpentry and Joinery qualification, I didn’t have the necessary skills or qualifications required for university level study.

At the time, there were several options (including A levels and foundation degrees), but the Access to HE Diploma at University Centre Reaseheath was the most cost effective, time efficient and tailored to those that had not been in an academic setting for a significant amount of time.

I spoke to several providers of Access to HE diplomas and found the academic team at UCR to be the most approachable, understanding, and supportive. Having not been in an academic setting for seven years, I was quite apprehensive and unsure of what to expect, especially as a mature student, but I was immediately attracted to UCR as the course seemed to be structured in an approachable way, and it was clear that support was there pastorally, and academically, whenever it was required.

The other seemingly unique factor about UCR was the breadth of subjects that were studied during the course. This was appealing, as whilst I had a strong idea of what I wanted to do, I also wanted somewhere that would give me exposure to a variety of different subjects, to ensure I was confident going into my chosen degree course.

The Access to HE Diploma was excellent preparation for degree level study, and it helped me to feel comfortable within an academic setting which was particularly useful as I had been in the workplace since I left school. Part of what enabled me to feel so comfortable was the approachable nature of the academics, all of whom seemingly had an unrivalled understanding of the fact that we were re-entering education, and had previously been out of that setting, for varying degrees of time.

I was particularly proud of the progress I made during my time at UCR. Having not written anything academic since school seven years prior, I finished the course with the ability to write essays that were evidently to a good standard, as I graduated with a Triple Distinction.

Just before the January term break, my father was diagnosed with an aggressive form of cancer that required an immediate and demanding treatment plan. I remember speaking to the course leaders about this, and I could not have felt more supported. At one point I very much struggled to concentrate and felt that I fell behind in one subject and it was clear that everything that could have been done was done to ensure I was able to get back on track.

After completing the Access to HE Diploma at Reaseheath, I progressed onto an undergraduate degree in Law at Keele University. I then did the Bar Practitioners Training Course (a postgraduate diploma, to enable me to become a barrister), and I am now at the University of Oxford reading for the Bachelor of Civil Law, which is considered to be the most prestigious legal Masters there is.

My aspirations involve pursuing a career as a barrister at the Commercial Chancery Bar, and in October 2022, I will begin my pupillage in London. Pupillage is the last part of my journey to the Bar of England and Wales and after this year of training I will be a fully qualified barrister, able to practice in my own right.

Undoubtedly it has been a long journey, but it all started at UCR and in my opinion that was not just the best possible platform for growth but was the most enjoyable re-entry into education I could possibly have had. I would not hesitate to recommend studying the Access to HE Diploma at UCR to anyone that is considering a career change or has been out of an academic setting for some time.

If your sights are set on studying a degree, but you need further qualifications first, don’t worry – our Access to Higher Education Diploma is your launchpad for higher level study!