A graduate who has made a significant impact on Reaseheath’s sustainability journey has been honoured with a prestigious national award. 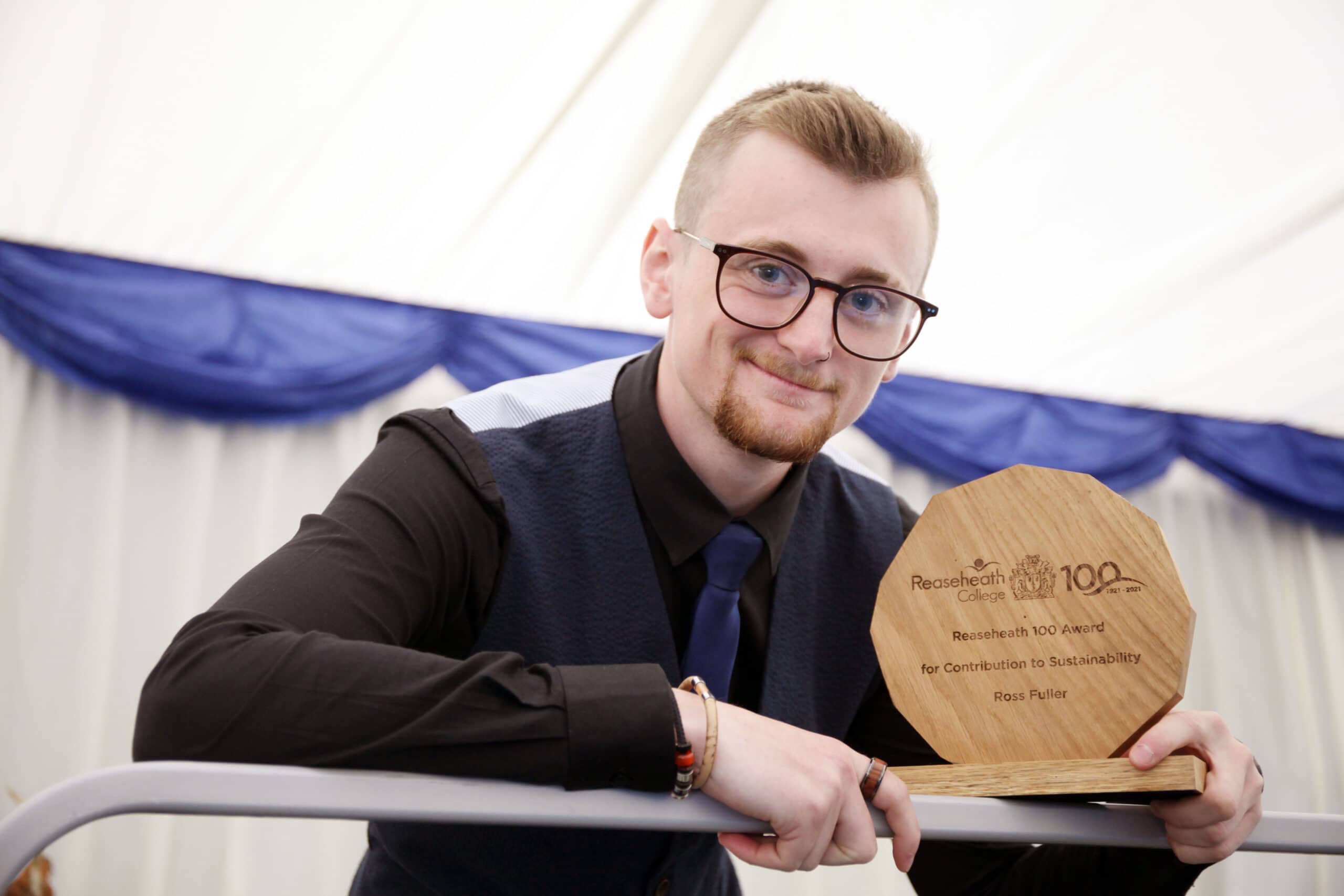 Ross Fuller, the inspirational former Chair of Reaseheath’s Conservation Society, has been awarded Runner up ‘Student Green Commitment Award’, a category within the Association of Colleges (AoC) ‘Student of the Year’ awards.

The award, announced at the AoC’s annual conference in Birmingham, recognises Ross’s outstanding leadership and pioneering work with both Further Education and Higher Education students and the way he has led the college-wide student voice on climate change and sustainability. The AoC ‘Student of the Year’ awards celebrate truly unique students judged to have gone above and beyond to positively impact their college and community.

Ross, who also received the Reaseheath100 Award for Contribution to Sustainability at our Annual Awards Ceremony, has inspired students across all courses to help prevent climate change by enabling them to develop a deeper and broader understanding of the complex issues involved and by introducing them to positive actions which they can take.

He has actively influenced Reaseheath’s sustainability goals by promoting a move to reduce paper and plastic waste, particularly in food outlets where all plastic drinks bottles have now been replaced with recyclable metal cans, and has also significantly increased support for national and international awareness days on topics such as energy saving and protection of native species and biodiversity.

Throughout the Covid-19 pandemic he encouraged a wide range of students to contribute to sustainability and biodiversity, both at home and within their local communities. He has also led student teams in current sustainability projects on campus such as creating a wildflower meadow, building habitats such as bug hotels, planting trees for a new Centenary Wood, joining wildlife, plant and bird surveys and developing new skills by using camera traps and bat detectors.

In addition, Ross was a speaker at last year’s Cheshire Net Zero Carbon Conference, which was hosted by Reaseheath in partnership with Cheshire East Council and Sustainable Nantwich as a regional response to COP26.

He has recently graduated with a BSc Zoo Management from University Centre Reaseheath and is now supporting the college zoo as a part-time zoo keeper and educator. He is considering completing a Master’s degree in Wildlife Conservation in the future.

Ross said: “It has been a great honour to receive this award. Sustainability and the way it affects us all is a major topic of concern. We are facing a global decrease in levels of human health and livelihoods and a reduction in biodiversity and in survival for wildlife, driven by a lack of basic commodities such as water and food.

“Young people now have the opportunity to influence the push towards a net zero world and we need to understand the challenges and have the academic and practical skills to help. Climate change has created this new type of education, and this is definitely seen here at Reaseheath College and University Centre Reaseheath.”

Sharon Yates, Assistant Principal, commented: “We are delighted that Ross continues to be a driving force in our sustainability journey. He is a true inspiration to our students, having set a standard that others are keen to follow. He has engaged our students and has set key targets and milestones for Reaseheath to reach and celebrate. He is an active and visible role model who leads our students forward to drive innovation in sustainability practices.

“During this academic year we have seen an increased interest from students in our sustainability aspirations and goals, such as our target of being carbon net zero by 2035. Ross has been a key driver in this momentum, and we are extremely proud of him.”

Corrienne Peasgood, President of the Association of Colleges, added: “The Student of the Year Awards rightly shine a light on individuals who have made a significant impact in their college or community. As a finalist for the Student Green Commitment Award, Ross was judged to have made an outstanding contribution and he should be extremely proud of his achievements.”

Do you have an ingrained curiosity about the natural world? Do you feel a responsibility to look after the earth and preserve it for future generations? If so, studying an Environment and Conservation Science degree at UCR is for you.

Florist Gabrielle is top of the tree