UCR Programme Leader for Agriculture Tom Furness has been fortunate enough in recent months to undertake a number of activities exploring the implementation of environmental practices on livestock farms in the UK, through funding provided by The Farmers Club Charitable Trust’s Agricultural Educators Award. 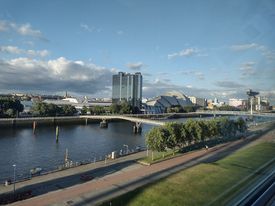 I arrived just in the nick of time on the Sunday evening to attend the opening ceremony of the 22nd World Congress of Soil Science. The congress was opened by Dr Bruce Lascelles, current president of the British Society of Soil Science (BSSS), and after speeches from key stakeholders including His Royal Highness the Duke of Gloucester, we were bag-piped over the River Clyde to the Glasgow Science Centre for a drink’s reception, in true Scottish style.

The next morning, we started with the first plenary speaker of the congress – Professor Ismahane Elouafi. As Chief Scientist of the Food and Agriculture Organisation (FAO) of the United Nations (UN), Professor Elouafi laid bare the facts of the issues surrounding soil and the need for sustainable food-systems in an effort to meet the 17 UN Sustainable Development Goals (SDGs), which have become the blueprint for international policy development since the launch of the 2030 Agenda for Sustainable Development in 2015.

The most obvious SDG linking with soil science is “SDG 15 – Life on Land”, as soil acts as a substrate for most eco-systems services; eco-systems services being the services ecosystems provide to humans. Unfortunately, 33% of land globally has suffered some degree of soil degradation such as soil erosion and organic matter depletion, and is estimated to cost the world $8billion annually. Alarmingly, FAO modelling predicts that this will only worsen without preventative action, with over 90% of land expected to be affected by 2050. Organic matter depletion, in particular, provides an issue for maximising soil carbon capture in light of climate change (“SDG1 – Climate Action”), with soil carbon stock depletion ranging from 25-75% of original carbon stocks in many of the world’s main agroecosystems such as croplands, grasslands and peatlands. As well as a direct impact on soil and plant biodiversity, its effect on nutrient instability within the soils also results in poorer water quality through diffuse water pollution, primarily from nitrates and phosphates, negatively impacting the globe’s capabilities of achieving “SDG6 – Clean Water & Sanitation” and “SDG14 – Life below water”. Collectively, these environmental impacts impede global food security and impact on food quality, effecting our ability to achieve “SDG2 – Zero Hunger” by 2030.

I find the implications on society are often the less obvious connections to make between depleted soil health and sustainable development although are sometimes easier to recognise in the developing world. Low soil-mineral content, for example, contributes significantly to the deficiencies of Vitamin A, Iron and Zinc in the diets of children and pregnant women where the availability of supplementation is limited, severely limiting the growth and health of children and reducing the globe’s chances of meeting “SDG10 – Reduced Inequalities” and “SDG3 – Good Health and Wellbeing”. Similarly, reduced agricultural productivity reduces economic growth (“SDG8 – Decent Work and Economic Growth”) which in turn will prevent access to essential health care and education where agriculture is the primary source of income (“SDG4 – Quality Education”). I won’t go through all of the sustainable development goals, however I’m sure you can see that soil plays a vital role in our lives whether we think it does or does not.

Despite strong messaging around the environmental emergency, there was a resounding sense of hope and opportunity from all speakers at the plenary and divisional sessions I attended on the Monday.  Professor Peter Gregory of the University of Reading, for example, talked us through the co-evolution of soil and plants some 850million years ago, when the first photosynthesising bacteria and eukaryotes began to capture atmospheric carbon, resulting in the formation of soil and evolution of plant species. If nothing else, a timely reminder that what once developed our soils could regenerate our soils once again given the appropriate management and use of our ecosystems.

As a lover of policy development, the opportunity to attend the first policy programme in the history of the World Congress of Soil Science was an exciting one; not that many would agree. Policy development is a tricky subject, and one incredibly hard to get most people enthused about, despite having a profound effect on each and every one of us. Personally, I find the balancing of economic, social and environmental development highly contentious and a great source of debate and discussion.

My favourite speaker from Tuesday’s policy sessions was Ronald Vergas, Secretary of the UN’s Global Soil Partnership, who’s presentation highlighted the place of soil in a global landscape of policy development and very much set the scene in terms of the need for change at a governmental level to help broaden the world’s approach to combatting soil degradation.

It was pointed out that soil has no specific recognition as an SDG despite being a prominent topic in soil science and environmental research. One factor influencing this is the lack of consistently measurable soil parameters in which UN member nations can monitor and assess. Historically, water and air quality have been much easier and consistent to analyse and monitor and have subsequently been a focus in policy development, yet Ronald Vergas makes the important statement that soils provide that essential interface between both soil and water. The ability of soil to filtrate water and improve water quality is one just ecosystem service provided by soil which is relied upon by each and every one of us, whilst the role of soil in carbon capture provides a perfect opportunity to improve air quality. Since 2017, however, the work of The Global Soil Laboratory Network has begun to both increase capacity of soil laboratories and harmonise the methods in which labs collect and analyse the soil data.

An organisation at the forefront of improving the relationship between science, data and food producers is the Soil Health Institute in the United States of America. Chief Scientific Officer Professor Christine Morgan discussed their recent advances in digital technology through the “North American Project to Evaluate Soil Health Measurements” which aims to improve both agricultural productivity and environmental sustainability in a way which puts the farmers and their advisors at the heart of decision making.

One particular project that has been ongoing is the development of a digital app to provide estimations of aggregate stability; in other words, the ability of soil particles to bind and resist forces such as water and wind erosion. With this, advisors can model the positive and negative impact of a variety of management options, such as tillage, cover-cropping and crop rotations, to help inform the extent to which farmers implement soil improvement techniques with a confidence that farm productivity is not compromised.  The institute are calling this the “innovation space”; allowing farmers to see where they benchmark compared to minimum and maximum parameters and model potential management strategies prior to implementation.

Of the hundreds of speakers in dozens of sessions programmed across the week, I had strategically selected speakers and sessions that I thought would cover these five principles of regenerative agriculture however I was surprised how little there was in the way of livestock integration and the role livestock play in cycling nutrients, building soil organic matter etc. Given the nature of my project, this was disappointing but does highlight an area of research which further needs exploring. One presentation that I thought was worthy of a mention is research being undertaken by Catriona Willoughby through the University of Aberdeen and SRUC which is evaluating the impact of livestock integration on arable crop yields and soil health.

After three long days of congress proceedings, it would have been remiss of me not to attend the congress gala dinner held at the fabulous Kelvingrove Art Gallery and Museum. I have attended some excellent conference dinners in the past including one at Christ Church College, Oxford, which you might know better as the grand banqueting hall in the Harry Potter movies. None, however, have been quite as impressive as this gala dinner at the Kelvingrove, which was opened in 1901 as the “Palace of Fine Arts”; palace being a fitting name for such a building. I was pleased in one regard that I had gone all out on a dinner jacket and UCR yellow bowtie in honour of such a venue, however I felt immediately overdressed when I arrived to find only a hand-full of us in bow tie and the remaining three hundred or so delegates in anything from a suit down to shorts, t-shirts and hiking boots in true soil scientist style.

The food, wine and ceilidh band were excellent although putting those aside, it’s important to remember the purpose of these events in providing such diverse networking opportunities. To my left I had the company of two researchers from Agroscope – Switzerland’s centre for agricultural research – and to my right I had researchers from Hungary and Germany, all eager to share their stories.

I can never emphasise to students enough the importance of finding opportunities to meet people, ask them questions, hear their stories and share their ideas with.

Our agricultural courses equip you with the knowledge, insights and ideas for an exciting career in the farming and food industries, helping to create a better future for us all.